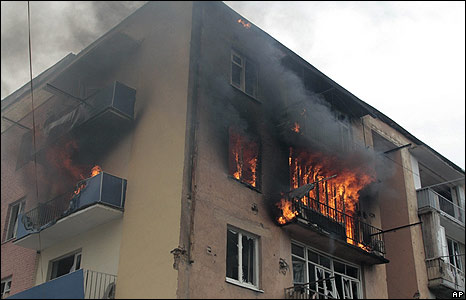 The South Ossetia crisis really is kicking off – is this going to become another Chechnya? Russia’s now apparently launching airstrikes on targets inside Georgia itself (the photo to the left being of Gori, the town where Stalin was born, fact fans) and is sending more troops. Although Russian President Medvedev is still referring to this as a “peace enforcement operation”, it’s now one with a death toll of 1,500 so far (plus 30,000 refugees fleeing the region – from a South Ossetian population of only 75,000 or so…).

Georgian President Saakashvili, meanwhile, is under no illusions that his country’s at war – and nor, it would seem, is former Russian President (and current Prime Minister, lest we forget) Putin: “War has started after a well-planned invasion”

Georgia by now must be starting to realise that it’s really very silly to get into a fight with the weak little kid in the class when he’s got a very large, very angry bear of a cousin standing next to him.

And so the panic that was in South Ossetia yesterday is moving into Georgia proper today, as hasty plans are made to evacuate, while a flick through the archives at Georgia on my Mind (written by a Norwegian, decidedly sympathetic to Georgia, who left the country yesterday) will give a speedy indication of just how long this conflict’s been brewing for.

Elsewhere, more handy blogs for updates and insight: The Caucasian Knot (superb stuff, combining press reviews with separate analysis and rumours from the ground), while Global Voices Online has a translated roundup of cyrillic blog reactions, including one from someone hiding in a basement in the South Ossetian capital as the mortars rain down, and a handy look at who’s to blame for the crisis (written by the author of The Caucasian Knot).

The Economist’s Edward Lucas also has some handy analysis (following his earlier warning piece about the dangers of tensions escalating, published the very day before they did), while Paul Noble of WindowOnEurasia (and the Azerbaijan Diplomatic Academy) warns of a background of growing radicalisation among Caucasian minorities in recent years that could see the current conflict spread wider than just Georgia/South Ossetia.

Sadly, this may well just be the start.

Abkhazia said on Saturday it has launched an operation to drive Georgia out of a disputed gorge, possibly opening a “second front” in Tbilisi’s battle to retain fractious breakaway regions.

The separatist foreign minister Sergei Shamba said Abkhazian artillery and warplanes struck Georgian forces in Kodori, a narrow gorge which cuts deep into the Abkhazian territory and is an ideal route for any invasion in the region.

There are also reports – TV only so far – that Putin has flown back from the Olympics in Beijing (where he apparently told President Bush that there would only be a ceasefire when there are no Georgian troops left in South Ossetia), and is currently in North Ossetia, over the Russian border, for purposes unknown. (Though considering his status as a living embodiment of Russian nationalism, it’s hard not to see it as a morale-booster for both the Russian troops and South Ossetians…) A combined EU, US and NATO delegation is also apparently being mobilised to try and negotiate a ceasefire.