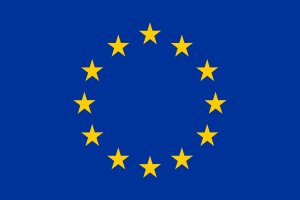 The great thing is, the flag is a bloody confusing little object.

First up, you can’t even get an agreement on who designed it – either Irishman Gerard Slevin or German Arsene Heitz, depending on who you believe.

Then there’s the confusion about what, precisely, it symbolises.

It has always had just the twelve stars, which have never born any relation to the number of member states, as many assume. After all, the flag was initially adopted for use by the Council of Europe, which at the time of a design being commissioned in 1953 already had 15 members.

In fact, thanks to a political spat between France and Germany, the number 12 was supposedly chosen precisely BECAUSE it was utterly meaningless.

Which in itself could be significant – hence the various conspiracy theories among the nuttier members of the anti-EU community who’ll occasionally come out with nonsense about zionist or masonic or Catholic symbolism and the like. Which is always entertaining.

The fact that one of the possible designers went on record about the Virgin Mary being his inspiration has led to various nutjobs quoting the Book of Revelation, 12:1 –

“And there appeared a great wonder in heaven; a woman clothed with the sun, and the moon under her feet, and upon her head a crown of twelve stars”

Naturally, however, as with pretty much anything predicted in the Bible, it’s all a load of old bollocks. Sometimes, though, bollocks is rather fun (especially when it’s bollocks that you can use to tar opponents of the EU with the “nutjob” brush to piss them off – which often isn’t too tricky anyway…)

Aaaah… Conspiracy theorists. Gotta love ’em. Is the EU a revival of the Holy Roman Empire as predicted in the Book of Daniel? Well, erm, no – but it still makes for an amusing read. Is the EU the antichrist, merely a sign that the antichrist is coming to power, or his future base? Well, why not, eh? Sounds like a laugh…

In any case, the flag had nothing to do with the EU until May 1986, when it was adopted by the then European Community, being confirmed as that of the EC’s successor, the EU, after the latter’s creation by the Maastricht Treaty of 1992.

So I suppose the only other mystery is why, considering it was only adopted by the Council of Europe on December 8th 1955, are the 50th birthday celebrations happening today?

To add to the conspiracies, can it really be a mere coincidence that today is (according to Wikipedia) the 1471st anniversary of the issuing of the second and final version of the Codex Justinianus, the basis of Roman Law? (The self-same Roman Law that ignorant critics of the EU argue as being a prime reason why the UK should leave the EU, as “you can’t have two legal systems running concurrently” – which always conveniently forgets Scotland… But shhh…) Or, indeed, can it be mere coincidence that today is also the 28th anniversary of the opening of the film Close Encounters fo the Third Kind – a movie all about government attempts to hide the truth from an unsuspecting public…

Anyway, after all that deep symbolism – and especially the newly discovered Codex Justinianus “coincidence”, I must say I’m convinced. The EU genuinely is an evil Catholic conspiracy to revive the Holy Roman Empire in preparation for the coming of the antichrist and end of days.

Which must surely only lead to the question – why then are the nutjobs afraid of it? Judgement Day and the Second Coming should be a cause for celebration, surely? If the EU is going to bring it about, you should be supporting it wholeheartedly – after all, you believe in the skyfairy and his woodworker rape-conceived offspring, you’ll be going straight to the cloud-strewn paradise thing, won’t you?

That’s the great thing about nutters and religious types – they’re credulous morons. All of them. Which means you don’t have to feel bad for pointing at them and laughing.EU